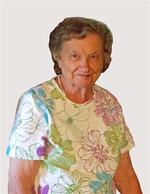 She was a member of Hickory Valley Baptist Church.

She was born Sunday, August 4, 1929 in Sparta, Tennessee. She was the daughter of the late Ben Pryor and Maude (Fletcher) Pryor. She was the wife of 58 years to Horace Aubrey Gribble.

In addition to her parents, she was preceded in death by her husband, Horace Gribble, sisters, Jean Rose and Mildred Eller Davis, and brothers, Carl Thomas Pryor and Arnold Pryor

Ruth was employed at the old Sparta Shirt Factory before leaving to start a family and then later employed at Dollar General Store after her family was raised. She enjoyed working in public seeing people.

She raised several gardens over the years and always canned/froze food for the Winter months. She helped on the farm with raising tobacco, bringing the dairy cows in to milk twice daily, gathering firewood, and cooking many meals for work hands.

Her family would like to thank all at Bailey Manor for the love and care Ruth received during her ten month stay. Also to special caregiver, Noretta Prime.

Funeral Services will be held at 11:00 A.M. on Thursday, November 19, 2020 at Oak Lawn Funeral Home with Doug Benningfield officiating. Burial will follow in Saylors Cemetery. The family will welcome friends on Wednesday, November 18, 2020 from 4:00 P.M. until 8:00 P.M. at the funeral home.

THE FAMILY HAS REQUESTED THAT ALL ATTENDEES PLEASE WEAR A FACE MASK DUE TO COVID-19. PLEASE CONTINUE TO PRACTICE SOCIAL DISTANCING WHILE ATTENDING ALL VISITATIONS AND SERVICES.

In lieu of flowers, memorial donations may be made to Saylors Cemetery Mowing Fund @ 2918 Pistole Road Sparta, TN 38583.