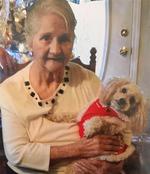 Elizabeth Faye Brady Stouky,73, of the Bon Air Community, passed away Monday, August 31, 2020 at her home. Elizabeth was born on March 19, 1947 to the late Richard and Frances Haerr Bostick in Springfield, OH.

Mrs. Stouky was a member of the Eastern Star for over 30 years. She loved to cook, crochet, spending time with her family and her dogs.

In addition to her parents she was preceded in death by; Husband- Fred Stouky, Brother- Allen Haerr and Grandson- Richard Shane Campbell.