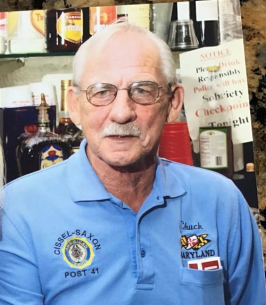 He was born October 11th, 1941 in Medford, Massachusetts. He was the son of the late William and Virginia Lucia. He was preceded in death by his three brothers Billy, Paul and Bobby Lucia and wife Ann (Margaret) Lucia.

Chuck remained in the Washington DC area after serving in the US Navy. He was employed as the estimator for a local iron shop and retired after 40 years. He was an active member of American Legion Post 41 in Silver Spring, Maryland where he enjoyed having a few Miller Lite’s and watching a good football game with great friends.

In keeping with Chuck’s last wishes his family will be scattering his ashes at Nubble Lighthouse in York, Maine. His family and friends will be holding a Celebration of Life at a later date.