To share your memory on the wall of Dolores Hudgens, sign in using one of the following options:

She was born December 13th, 1933 in Nashville, Tennessee to the
late Hubert Hudgens and the late Mary Frances Hudgens. She
married her longtime friend and love, James Reed Hudgens, in
August of 1950. She and James moved to Warren, Michigan where
they began their lives together and raised two children, Joyce
Elaine and Waymon Reed. Dolores became a schoolteacher at the
Warren Consolidated Schools helping troubled teens. She enjoyed
life and always had a smile on her face and a spring in her step.
She loved to go to the beach, take hikes, go on cruises, and take
road trips. She was game for anything fun and adventurous to do
with her family and friends. She had a passion for trail riding and
showed horses for many years. She adored her two grandchildren,
Amber and Colton, and helped on numerous occasions, for many
years, with homework assignments and school projects. She was
always busy, whether it was being a “Nana” to her grandkids or
cooking game birds with biscuits and gravy, living life to the fullest.
Several years ago, she and James moved back to Sparta,
Tennessee to be closer to family.

She is preceded in death by her parents, Hubert and Mary Frances
Hudgens; brother, Hubert Hudgens, Jr.; and brother-in-law, Gene
Brock.

Dolores was an exceptionally kind and loving person. She will be
missed by many.

A Memorial Service will be held at a later date.

Online condolences may be made to the family at
oaklawnmemorial.com on her Memory Wall.
Read Less

To send flowers to the family or plant a tree in memory of Dolores Ann Hudgens, please visit our Heartfelt Sympathies Store.

Receive notifications about information and event scheduling for Dolores

There are no events scheduled. You can still show your support by sending flowers directly to the family, or planting a memorial tree in memory of Dolores Ann Hudgens.
Visit the Heartfelt Sympathies Store

We encourage you to share your most beloved memories of Dolores here, so that the family and other loved ones can always see it. You can upload cherished photographs, or share your favorite stories, and can even comment on those shared by others.

Lois Hatfiled and Patty Speakerman and Love, Mikki sent flowers to the family of Dolores Ann Hudgens.
Show you care by sending flowers

Posted Oct 29, 2020 at 07:16am
RIP Dolores, You were like a mother to me, and I will never forget you. I believe you are in a better place now and one day we will be together again.

5 trees were planted in the memory of Dolores Hudgens

Posted Nov 16, 2020 at 08:23am
Although we met Delores just a few times, we were immediately struck by her positive and loving nature. She is a lady of great strength and faith who influenced, in a kind way, all who she came in contact with. God bless you, dear Delores.

Posted Nov 05, 2020 at 01:48pm
We are so very sorry to hear of the loss of dear Delores. She was such a kind soul, and was always there for my sister Andrea and their family. I’m quite sure she was a wonderful mother, mother-in-law, and grandmother, and I’m glad we knew her. The earth has given up an angel, and may you Rest In Peace Delores. You’ve earned it.
The Bell Family
Comment Share
Share via:
TF

Posted Nov 04, 2020 at 09:45am
Dolores was a beautiful soul and I am so happy that I was able to have met her. She always welcomed me with open arms, her beautiful smile and loving kind ways. My heart goes out to the family at this difficult time ~
Comment Share
Share via:
PH 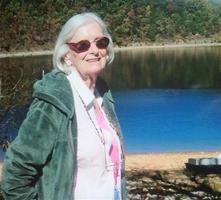