To share your memory on the wall of Geraldine Cantrell, sign in using one of the following options:

A 1969 graduate of McMinnville Central High School, she was employed as society editor of “The Southern Standard”, the towns newspaper. She later worked at McMinnville Garment Company, as a machine operator and later in the office. When her husband went to the Air Force in 1951, she worked in the office at Mead Bakery, then Sandia Air Force Base in Albuquerque, NM. When he was transferred to Travis Air Force Base, CA, she worked in the office of Yuba Mfg. in Benecia, CA. They returned to McMinnville in 1955, then moved to Cookeville, TN for 8 years, then to Sparta, TN until her death.

She was active in community and church organizations. In Cookeville, she served as president of Capshaw PTA and Cookeville Jaycettes. She taught Sunday School at First Baptist Church until they moved to Sparta in 1964. In Sparta, she served as president of White county PTA Council and was the first female president appointed to serve as permanent chairman of the grand jury. She was secretary of the United Givers Fund. She retired from Sparta Eclectic and Water System in 1989, after 17 years. She was a member od Sparta First Baptist Church, where she taught Sunday School for over 40 years and in United Woman’s Missionary Union in the church and association. She was responsible for starting the Help Center in Sparta and the Prison Ministry in Pikeville, TN.

Funeral Service will be held on Sunday, September 8, 2019 at 2 pm at Oak Lawn Funeral Home with Rev. Brad Walker officiating. Burial to follow at Mountain View Cemetery in McMinnville, TN. The family will receive friends on Sunday at Oak Lawn from 12-2 pm.

In Lieu of Flowers, donations may be made to CureFest for Childhood Cancer Research. Oak Lawn Funeral Home will forward the charitable donations.

To send flowers to the family or plant a tree in memory of Geraldine Rader Cantrell (Rader), please visit our Heartfelt Sympathies Store.

We encourage you to share your most beloved memories of Geraldine here, so that the family and other loved ones can always see it. You can upload cherished photographs, or share your favorite stories, and can even comment on those shared by others.

Posted Sep 04, 2019 at 10:32am
We are saddened to learn of Gerry's passing. Jeff and Forest were Air Force buddies in Albuquerque. Gerry's quick wit and love were so loved by the men as she was a piece of home with her home cooked meals. We send our sincere sympathies and prayers to their boys and know we will always remember these great friends.
Jeff and Zelma Mead
Lewis, KS
Comment Share
Share via: 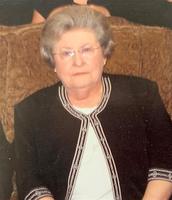