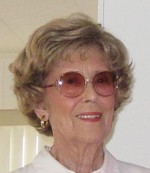 Hallie's husband was a veteran of World War II, and she worked at an aircraft factory in Louisiana during the war. She was also owner-operator of a restaurant in Nashville for many years before moving to Florida where she lived for most of her life.

There will be a private graveside service at Oak Grove Cemetery in Warren County, TN.