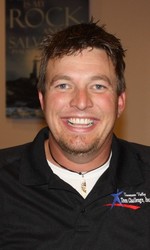 Jody Michael Savage, 34, of Sparta, TN passed away Saturday September 14, 2019 in Sparta, TN. Jody was born on December 13, 1984 to Mark and Pamela Rogers Savage. He was a veteran of The United States Marine Corps.

He was preceded in death by his Grandfathers- George Malcolm Savage and Leslie Glenn Rogers.

In lieu of flowers, the family wishes donations to be made to Sparta First Baptist Church Youth Group and Teen Challenge. www.teenchallengeusa.org/give