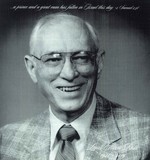 He was born on September 14, 1921 on the family farm in Meshack, Kentucky to Sam and Thelma Ross. He was the oldest of 2 brothers, Max and Sam Ross, and a sister-Lucille Geralds who all preceded him in death. He was a faithful husband of over 72 years to Jean Killgore Ross, who preceded him in death by 7 days.

Louis Ross graduated from Tompkinsville High School and David Lipscomb College. By himself, he taught grades 1-8 in the one-room schoolhouse with over 60 kids, where he had also attended. After the attack on Pearl Harbor, he answered the call to serve his country and joined the Army Air Corps where he served as a Radio Operator on B-24s in the Pacific Theater. He received the Air Medal for bravery. Out of the original 36 crews in his reconnaissance group, his was the only one to survive.

After the war ended in 1945, he attended and graduated from Peabody College for Teachers. There he met and married the love of his life.

Upon graduation, he taught one year at Tompkinsville High School before he moved to Florida to attend graduate school. He obtained his Master’s in Education from Florida State University. He began teaching at Pensacola Jr College in 1949 where he worked for 36 years as a professor, assistant Registrar and Registrar. He also established and coached the first basketball program. He helped establish and served as Florida NJCAA Regional Director of Athletics.

He was a dedicated Christian and served in many ways: part-time preacher, Bible teacher, and elder at Gateway Church of Christ in Pensacola, Florida. After retiring from this career at PJC, Louis continued to serve his church by teaching and traveling to do mission work in countries
around the globe. After Jean’s blindness, they moved to Sparta to be closer to family. In Sparta, he continued served God and served as a deacon at Central Church of Christ. He loved God and taught and encouraged his family and others to put God first in your life, to seek God’s
direction here on earth and to prepare to spend eternity in HIS heavenly home.

He was a wonderful father to:

He was loved and admired by his 11 grandchildren:

And proud great-grand father to 14 great grandchildren so far:

A celebration of their lives together is planned for Sunday November 17th at Central Church of Christ.
1:00 pm Visitation
2:00 pm Memorial Service