To share your memory on the wall of Jeanie Gribble, sign in using one of the following options:

She was baptized into Christ early in life and was a member of the Oa... Read More
Jeanie Lee Gribble, age 65, was born June 16, 1955 to Earnest and Dorothy Gribble. On April 3, 2021 at her home in Sparta, TN, God said her journey on Earth was done.

She was baptized into Christ early in life and was a member of the Oakwood St. Church of Christ in Sparta. She graduated White County High School in 1973, where she then attended Tennessee Tech University in Cookeville, TN.

She was preceded in death by her mother, Dorothy Copeland Gribble and father, Earnest T.Gribble. One sister, Jacqueline Gribble and one brother, Thomas Russel Gribble.

She leaves to cherish her memory: One brother, James E. Gribble (Denise), three beloved nephews that she raised as her sons, Jeffery Gribble (Leona), James T. Gribble, and Jason Gribble, and one great-nephew that always pulled at her heart string, Mykah Gribble.

A host of nieces, nephews, family and friends also survive.

No services are planned at this time.

To send flowers to the family or plant a tree in memory of Jeanie Lee Gribble, please visit our Heartfelt Sympathies Store.

Receive notifications about information and event scheduling for Jeanie

There are no events scheduled. You can still show your support by sending flowers directly to the family, or planting a memorial tree in memory of Jeanie Lee Gribble.
Visit the Heartfelt Sympathies Store

We encourage you to share your most beloved memories of Jeanie here, so that the family and other loved ones can always see it. You can upload cherished photographs, or share your favorite stories, and can even comment on those shared by others. 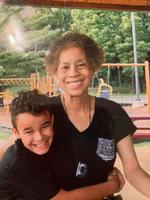